Living on the Charity of Others
During my 10-day Vipassana meditation, I was essentially a monk living off on the charity of others. The course program designed it to be such - to be completely reliant on the charity of others is to dissolve the ego. There were the old students who funded the course, the servers who prepared our food, and a whole host of people who invested time, effort and money to see us through those precious ten days - without payment exacted from us. The course would not have happened without that charity. 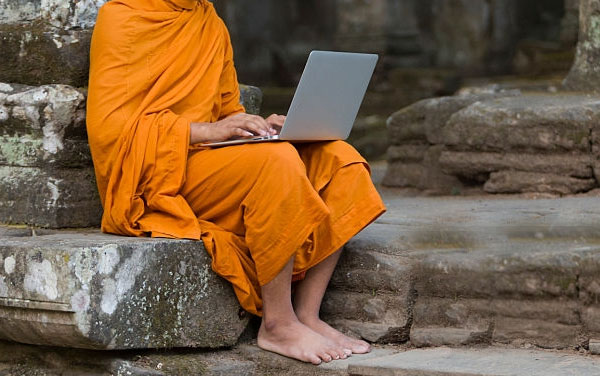 Keeping Life Lean
Pretty much, even in the last few years, I'd been emulating the material renunciation of a monk - I've nearly developed a pathological aversion to owning property. I own no car, house or land. Nearly everything I own on the planet fits in my backpack. I believe that anything beyond my meager needs is plain clutter. Think about it. If I owned all of those toys, would I have the mobility to be this nimble, turning my entire life on a dime? People use property as currency. My currency is freedom to exercise my options.

Bowl and Staff
On some monasteries, a monk is released into the outside world equipped with only a bowl and a staff for his survival. I find that appealing, but I'd like to add a modern-day twist to it. Since I left Dumaguete to drift where the Flow takes me, I've taken to my laptop for my survival instead of a bowl and staff. Instead of knocking on doors to beg for shelter, I knock on hotels...the big plush ones, for a roof over my head. Instead of putting out a bowl for food, I go to fine restaurants to fill my belly.

Laptop
I cannot pay for these things - I have very little money...not enough to even last me 2 months on the road. But I offer something unique to these establishment owners - increased profile on the internet for their establishments through search-engine-optimization on squeaky-clean hand-coded websites compliant to W3C standards. No forward-thinking owner can say no to that. The things I ask for, pale in comparison to what I put on the table. I give it all I have, and it's only fitting that I also reward myself accordingly with good food and comfortable shelter. It doesn't always happen, but that's the general plan.

Personal Empowerment
The result? I get food and shelter and they look good on the internet. Sure, it's not exactly living on the charity of others. In this day and age of personal empowerment, I'm not sure if I can subscribe to that 'charity' thing. So, how do I dissolve my ego? I'm not sure as I'm still struggling with that. Apologize when I know I'm wrong? Good start, but hardly adequate. I believe ego is important in measured doses. Like salt. A little salt brings out the flavor of food. But too much ruins the taste.

Ending Thoughts
With this new undertaking, I'd like to redefine my role as a monk. I'm not sure if I'm romanticizing this monk idea in my head, but I'm sure I don't want more than what I need. I'll continue this lifestyle without living on the charity of others but instead, playing to win for everyone...not just me. It's easy to play to win for oneself - just bulldoze your way through regardless of ethical consequences and you're halfway there. I think the greater challenge is to play to win, where if you win, nobody loses - all stakeholders are happy. I see my work as a catalyst for positive change. I provide a service that's useful to the consuming public, useful to the business owner, and beneficial to me. The ripple effect can only spread the benefit. Yes, everybody happy.

(Mar 6, 2016) As I become increasingly aware of the world I live in and the role I play in dealing with all the challenges, my definition of cyber monk morphs into one of increased empowerment and control....more »»

(May 6-7, 2012) Armed with only my laptop and very little money, I thread the open road as a nomadic renunciate subsistent on the charity of my universe. With no or little ego to get in the way, the world was my oyster.....more »»

I have been thinking recently that perhaps it is important to acknowledge that maybe everything we come with serves a purpose. we just need to find the balance in order to wield it properly. like many, I struggle with ego and anger. Ego and anger for the sake of it, is an imbalance to be sure. but I think to deny either of them completely may be a mistake....sometimes, they can motivate you towards a higher intention. or to self-preservation, or the the protection of others.

In the pursuit of "better" living, I think there can be a perception that one must eradicate these (and other) qualities which are intrinsic to the human condition. Which to me, also doesn't seem like balance. So maybe it's more important to accept these aspects of our nature, and figure out how to let them serve us. Although that of course would be the tricky part.... just a few lucid thoughts of my own 🙂.

(May 7, 2018) wow! blows my mind away, thinking of Plif Damon, Doi Domasian and Edcel Suyo! thanks bosing Gigit Sulit for this write-up.