Round 1
I made a bold bid for a one night stay at Marina Bay Sands in exchange for my web services, touting to its management that the structure has become an identifiable global signature landmark for Singapore in the same iconic way the Eiffel Tower stands for France and Petronas Twin Towers for Malaysia...its presence heralding Singapore's message to the world at large that it has arrived...and all the superlatives you could gravy onto it. They replied saying they are considering my offer - I crossed my fingers. Then they said NO. Ha-ha. Oh well, that's life. Back to the drawing board.

Round 2
Undeterred, I sent them another email a few days later adding,

"Even though your office has already declined my offer to feature your hotel, I strongly feel it's only fitting that Marina Bay Sands should figure prominently in all my writings about Singapore, being the iconic landmark which people identify with Singapore. Your logo is conspicuously missing. Marina Bay Sands is not just a hotel but a Singapore flag draped in building-clothing. I hope you agree with me that one night at Marina Bay Sands is not too much given the goodwill mileage generated by giving a nomadic seeker a shout at the abundance of what a grand city can offer (again, in this context, Marina Bay Sands IS Singapore)...I hope you treat this case as an 'out of the box' PR campaign on your part. The conventional proprietary marketing campaign will not fit into this mold." 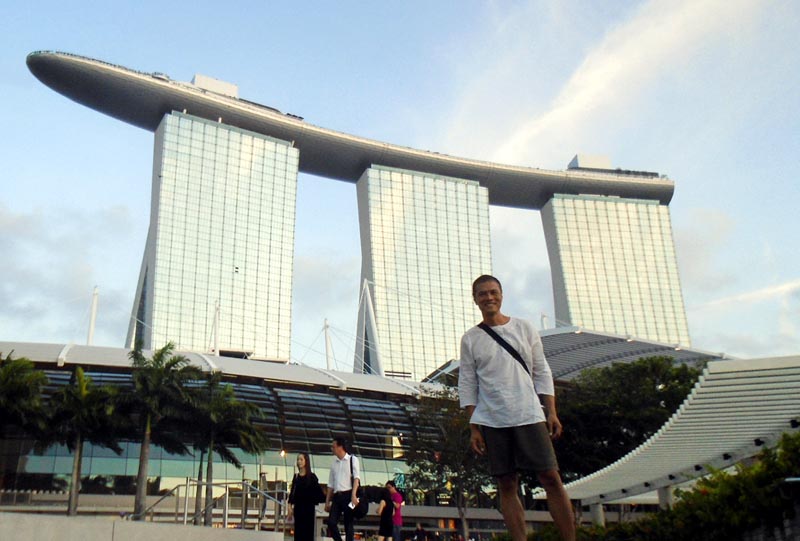 Mind you, I wasn't trying to flatter. I strongly felt about all those. But again, a NO. At least I can't be haunted by the spectre of 'should have done that', given my persistence.

Backdoor Route
It wasn't exactly a total rejection. They didn't open the front door, but they opened up a backdoor, adding in their email:

"However, we would be delighted to arrange for a weekday property tour for you that will include a viewing of one of our top suites as well as the Sands SkyPark"

Amy
I showed up at the meeting place and time with the lovely Ms. Amy who personally gave me a one-on-one tour. She also looks after Marina Bay Sands' external image - what is being said about Marina Bay Sands outside their proprietary and accredited channels. She toured me to their 3rd-tier suite - the 3rd most expensive and the SkyPark (where you see that curved surfboard on top of the 3 buildings). I asked her the most compelling questions - like who would spend US$6,000 for one night at that suite. She was very careful about her answers ensuring that the privacy of their well-heeled clients are not compromised.

Impressions
After touring the facilities of Marina Bay Sands together with the offerings of the nearby tourist attractions, I was wowed. In fact, in Singapore, I am wowed on every turn. I can walk in any direction and inevitably, I will come across something that will just wow me. Singapore is full of those. Marina Bay Sands though is perhaps at the apex with all the wow-factors. Its architectural design is unique and unrivalled. The opulence is over the top. At the lobby alone, there is a broad long section where the ceiling towers to 10 storeys high! At the price they charge for a room, they could have made a fortune constructing rooms out of that idle space. But no, it was left open to make a powerful statement not so much of design but more of arrival - as in, Singapore has arrived as a major league player on the global stage! Actually, it has long arrived, having captured the admiration and envy of much of the free world. This structure is only a long overdue validation of all that.

Ending Thoughts
The opulence, the price tag, the exclusivity of it all once again reminded me that the rich and privileged people live in a world too alien for the likes of you and me. Every once in awhile, getting a glimpse of that known but hidden world is a welcoming treat. Singapore is inspiring. It has shown the free world what a city-state can do in so short a time.


»» next Traveling story: Power Yoga Class at Yoga Inc., Singapore
»» back to Traveling
»» back to Homepage