Killer Sequence
I had been regularly attending yoga at Yoga Inc. to get back on track with my practice and regain my fitness level. I offered to conduct a yoga class as well. After my 5th yoga class, Ashly, the owner said, "At this point you already know they like it hard even for our regular class. So if we have to call your class POWER YOGA, you have to kill them. The expectation is high". 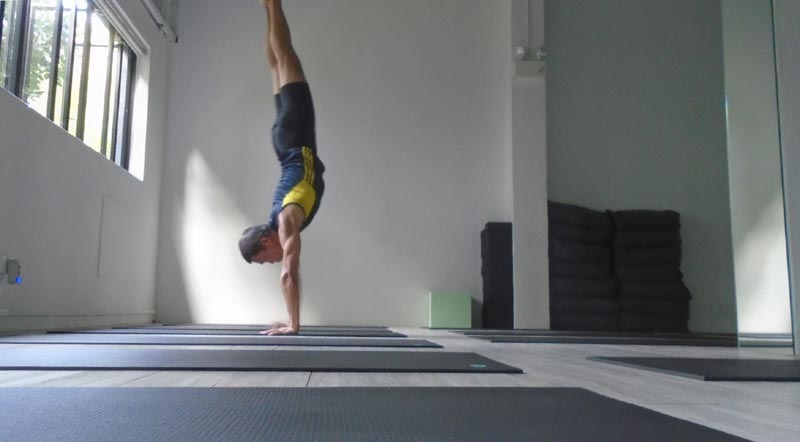 Hmmmm...these Singaporeans take no prisoners - they kill me on every class (and I'm loving every minute of it). At a time when I'm just regaining my fitness back, I have to come up with a killer sequence that is doable for the beginner with option to push it hard for those seeking more challenge. Since I perform all the asanas as I cue them, I hope my killer sequence doesn't kill me first. Ha-ha, with a gulp!

Way below is the script for my actual one hour sequence, complete with introduction.

Thank you Ashly for giving me the opportunity to conduct this class....and thank you for allowing me to pursue my yoga practice at Yoga Inc.

Introduction
Greetings everyone, my name is xxxxxx and I thank you for coming over. It's a Saturday morning and it's tempting to sleep-in. But you decided to come and honor your practice - that says a lot about your commitment.

About the Sequence
The sequence we'll be doing this morning is Power Yoga. It's not as extreme as it sounds, think of it as Ashtanga with a few liberties without the rigid sequence. We will develop heat as we go along, sweating our way through. We will employ Ujayii Breathing in this class. No mouth breathing.

Introducing Bandhas
I'd like to introduce 2 things also in this session. We engage muscle locks at all times, called "bandhas". There are a few bandhas in yoga but now we employ only 2. One is the moola bandha. This is your anus and this is your genitalia. The soft area in between, right above it the perineal muscle. You essentially pull this muscle up and keep it engaged. How do we engage this? You hold it like you're holding your pee. The 2nd bandha is the Udiyaana Bandha. We simply engage in the muscle area 2 inches below the navel.

Precaution
Any first timer? First timer, don't be too focused on the alignment...it'll happen at some point. But focus on the breath and the bandhas. When you feel too tired, stay out of your ego and go into a child's pose until you recover and then join the class.

Any injuries? What kind of injury? I'm not a doctor. I'd like you to listen to your body and honor that. If there is pain, stop. If there is discomfort, discern if it's simply being out of your comfort zone or if it's an injury waiting to happen. Your body talking to you is more important than me talking to you.

I LIGHT WARM UP STRETCH

Downward Dog (Adho Mukha Svanasana)
Let's all find ourselves in Downward Dog, but be easy, we're starting cold here. Just acclimatize into the pose, maybe knees slightly bent, alternately pedaling the heels up and down, maybe the heels are still not touching the mat...that's ok. We'll sink slowly into the pose.

Relaxed Standing Forward Bend, Hanging
Let's slowly walk our fingers back towards our toes...and let's fold our arms into our elbows, upper body hinging from the hips. Knees could be slightly bent and we simply do nothing for now...just allowing gravity to its work us. As we stay here, feel the back of the legs loosening up, feel the lower back muscles letting go. Breathe! still mindful of the Bandhas....pulling up the perineal muscle and engaging our abdominals 2 inches below our navel.

Standing Sidebend (Indudalasana)
Inhale sweeping the arms up and continue reaching up while grounding your feet to the map, shoulders away from the ears. Feel the body pulled in 2 opposite directions. Create length...create space...breathe...and release. Right hand grabbing the left wrist, inhale lengthen, and on the exhale, bend to the right...left foot firmly on the mat, pushing the hips to the left and pulling the left hand to the right. Breathe. Come back to center. Other side.... Come back to Mountain Pose.

Tree Pose (Vrksasana)
hold for 5 breaths and transition to Hand to Big Toe without putting the foot down.

Hand to Big Toe Pose (Utthita Hasta Padangusthasana)
hold for 5 breaths then back to center, let go of the toes but keep the leg stretched forward. Without putting the leg down, transition into Warrior III

Warrior III (Virabhadrasana III)
hold for 5 breaths then bend the standing knee, thighs parallel to the mat and stretch the back leg towards the front - hold for 5 breaths. On the last inhale, straighten the bent knee and come back to Mountain Pose. Shake your legs and arms...decompress.

Side Plank (Vasisthasana)
(Vinyasa until upper plank): put your full body weight on the left hand and roll to the side, right hand reaching up, keeping the body straight and linear. Look at your right hand and breathe. For those who want to challenge themselves, two index fingers on the right big toe, inhale lengthen, and straighten the leg on the exhale, fingers pulling the right big toe. Focus on the breath and engage the bandhas. Last exhale release, back into plank, full pushup, now let's do the other side. Release back into plank, lowering down into Chaturanga...Come back into Mountain Pose.

Boat Pose (Navasana)
Vinyasa until Downward Dog, jump through or step through your hands for a seated pose. Bend both your knees and grab behind the thighs, keeping the back straight. Inhale lengthen, and release the legs on the exhale, extending the arms forward, straightening the legs pointed 45 degrees to the corner of the ceiling. Breathe for 5 counts. Cross your legs supporting your body by putting your hands beside you, inhale lengthen, and lift on the exhale. Hold for a few breaths. And release, back into Boat. 3x. From crossed legs, see if you can snap your legs back into into plank.

Locust Pose (Salabhasana)
From plank, lower yourself down completely, extending your arms forward. Inhale lengthen, on the exhale, lift your chest, lift your arms, lift your knees and thigh. Breathe. Spread your wings like a jet plane, lifting your chest ever higher. Breathe. Back to Superman or Superwoman...lift...breathe...5...4...3...2...1....Child's Pose everyone. You did well. Finish off with a Vinyasa.

Bridge Pose (Setu Bandha Sarvangasana)
Let's go flat on our backs, bending our knees until the heels touch our gluts, feet hip width apart. Inhale and on the exhale, lift your pelvis and your chest high up to the ceiling, hands together behind your back, fingers interlaced, arms extended and breathe. Release and go into a Child's Pose.

Wheel Pose Push-Up (Urdva Dhanurasana)
Let's go back lying down again - knees bent like Bridge but we put our hands against the mat beside our ears. On the inhale, lift your pelvis and your upper body up, straighten your arms as much as you can and stay here for a few breaths. For those looking for a challenge, let us do Wheel Push-ups. Exhale lower down back flat on the mat, and on the inhale, lift! Higher! Higher!....5x.

Seated Forward Bend (Paschimottanasana)
As a counter pose, go into a seated pose, inhale reach the arms up and keep reaching up, feeling that stretch, and on the exhale, bend forward, chest to the knee, top of the head reaching towards the toes, creating length and space. Breathe.

Crow Pose (Bakasana)
Find yourself in Downward Dog and move the feet closer to the hand and do the crow. Hold for 5 breaths.

Crow Pose (Bakasana)
From Tripod, transition back to Crow. Hold for 5 breaths and snap back into upper plank. Do a Vinyasa until Downward Dog.

Headstand (Sirsasana)
From Downward Dog, move your feet slowly towards your head, keeping your knees straight, until you can't go forward anymore. Then slowly move your hips back to shift your body weight towards the back. You will reach a tipping point where the toes automatically lift up. Now you have balance. Bend your knees keeping it close to your chest. Now try to point your knees up the ceiling. Slowly straighten your legs and keep it pointed to the ceiling. Hold for 5 breaths.

Headstand Jackknife
To those looking for a challenge, join me in doing a Jackknife. Inhale lengthen, and on the exhale, slowly move the hips back as counter weight as you lower down your legs towards your front keeping them straight. See if you can hover your toes just above the mat without touching it. On the inhale, lift your legs back up to headstand while moving your hips forward to maintain balance. Let's compose ourselves here. You can gradually release and go into a Child's Pose. To those who can do more, let's do more. On the exhale lowering the legs down....5x. Childs Pose.

Spinal Twist
Vinyasa until Downward Dog. Jump through your arms to go into a seated pose, Dandasana. Lie down on your back first, then on your right side. Take the top of the left foot behind the right knee, right hand pressing down on the left knee to the mat. Inhale lengthen, left arm towards the ceiling, and on the exhale, turn your left shoulder and your left arm towards the mat while right hand presses on the left knee. Feel the twist on the torso. Hold for 5 breaths. Back to center. Other side.

Corpse Pose (Savasana)
We now come to the tail-end of the session by lying face up on our mats, hands stretched to the sides, palms face-up, feet dangling to the sides for Corpse Pose. Stay here until the breath normalizes (stay here for 5 mins min). To awaken: Without opening your eyes, wriggle your toes and fingers, roll your eyeballs and focus on what your hear. Bring your senses back to life. Open your eyes, lie on your right side and stay there a few breaths. Let's all go back to a seated pose, legs crossed.

Gyan Mudra Chant
Keep seated, legs crossed or in Lotus, hands on the knees, arms lightly stretched out, thumbs lightly touching the index fingers while the 3 other fingers are also lightly stretched out. Inhale, pause, and on the entire exhale, say OM (pronounced: AUM) until the lungs are empty. Pause. Inhale and repeat 3x.

Namaste Mudra
Remaining seated, let's touch our palms together in front of our chest for Namaste Mudra. Look at everyone around the room and greet each other Namaste, honoring the light that resides in all of us. Namaste everyone. This ends our session.

Next stop: Exploring More of Singapore

»» next story: Exploring More of Singapore
»» next Yoga story: Back to Cebu, Back to Yoga at Surya Nanda Yoga Studio
»» back to Yoga
»» back to Homepage