Getting There
Getting to Teluk Cempedak by the #200 Rapid Kuantan bus from Kuantan town center was cheap (MYR2), short (37 mins) and painless. For that alone, it's worth the trip.

Restos and Souvenir Shops
Before you even get to the beach, you'll see popular brands like McDonald's, Starbucks Coffee, and mostly local eating establishments. No need to bring food - there are lots of eating places.

White-ish Sand
The beach itself is wide with the last 20 feet on steeper decline towards the water. The sand is whitish and fine. It was a Sunday so the city crowd was there. Still, there was more than enough room for everyone.

Walkway
An interesting feature of the beach is the walkway connecting to the other beach, over big boulders. The walkway is about 100 meters offering a great view of the main beach and the ocean. 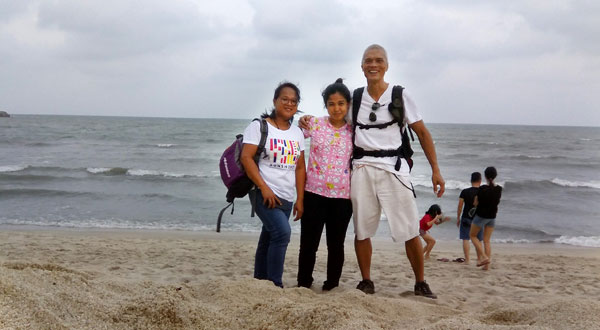 Other Beach
Reaching the other beach, it was mostly empty - not much people and no commercial establishment. But it was equally as wide and about 50 meters long, with the same kind of sand. A few boulders were on the shore making for a nice chillout sit.

Monkeys
The monkeys rule here and they can get pretty aggressive with people who carry food with them. One monkey jumped on my backpack looking for food. When I shooed it away, it got wild and angry. It came to a stand-off until I got more aggressive - then it stood down.

Garbage
The only thing that took away from the experience was the presence of garbage on the beach, mostly single-use lastic wrappers thrown away by visitors. To say it ends up in the sea is an understatement. It ends up in the bellies of big fish and small fish just get trapped in them. I hope the authorities do something about it.

Ending Thoughts
If you are already in Kuantan, a visit to Teluk Cempedak is well worth the time and trouble - it's only 37 mins away and the bus takes you right up the beach. The beach itself is worth the effort - white sand, long walks, boulders, wild monkeys, restaurants and stilted walkway.

How to get to Teluk Cempedak from Kuantan town center

»» next story: Visiting the Pahang Art Museum
»» back to Traveling
»» back to Homepage