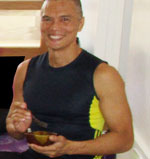 Conducting a Half-Day Yoga, Pranayama and Meditation Workshop at The Zen Loft

Yoga Workshop
Chinqui, a friend I met in Cebu who is now based in Makati, invited me to conduct a half-day yoga workshop for her and her friends in her stylish unit along the trendy Guijo Street in Makati. The participants would be a first timer, a beginner French guy and an Ashtanga regular. I conduct 1-hour yoga classes as a matter of course, but not a half-day yoga workshop. Undaunted, I said yes and went about planning my half-day activity menu.

Guijo Street
It's been many years since I've been to Guijo Street, last time was to catch the action at the iconic Saguijo Cafe Bar along the strip. I believe it was back in the day when the I Love You Store by Corinne was still on the 2nd floor.

Chinqui took me for a tour around her upwardly mobile neighborhood. Aside from Saguijo, chic restos and bars now line up the street. 12/10 Restaurant was busy with a good doze of expat denizens. Across is Restock Curiosities with its art gallery and pizza servings. Trigo Bakery around the bend on Kamagong serves Torched Mozarella on tuna wrap. Satinka Naturals serve Kalinga (Mountain Province) specialties. Particularly at night, the area is happening.

Participants
Three participants arrived making it a collective of 5 altogether. Sandy, a first timer, Michelle, a seasoned but on and off the mat practitioner, Adrien, the Frenchman who is a beginner, and Chinqui who hasn't done yoga in a while. Being a small group, it became an intimate private gathering with all of us getting acquainted and sharing a bit of ourselves.

Workshop
The workshop consisted of 4 components:

What I found useful in a half-day workshop is that I have ample time to talk about philosophy and concept, do's and don'ts, and even share some life experience without feeling rushed for time. I conducted 3 types of Pranayama, breath-visualization-observation for meditation and took them for a narrative tour deliberating on the forces and processes that came into play to bring that glorious food before us. We started at 8am and began with our meal at 11:30am with a sumptuous breakfast spread heartfully prepared by our gracious hostess, Chinqui.

Reiki
As an added bonus, Chinqui did a full Reiki session on me, that took an entire 40 mins. She identified areas that needed more healing than others. Her palms on my body felt like hot iron plates. It was soothing, relaxing and of course therapeutic. We ended the day with a Chinese lunch at Mao Jia Hunan Cuisine, known for it spicy dishes.

Ending Thoughts
It was a productive day - conducting a workshop combining yoga, pranayama and meditation, meeting new and interesting friends, having a sumptuous brunch and bonding with Chinqui. Valentine just arrived a day earlier.

The Zen Loft
(May 10, 2018) Teacher Gigit ... heartfelt thanks for this lively workshop. Sending you our very best wishes there in Kathmandu and on your onward journey to India!

Elsie Yang
(Feb 16, 2016) Any suggestion where i can go for beginners yoga lesson in QC? I need to do yoga for my bad back.

TheLoneRider
"Any suggestion where i can go for beginners yoga lesson in qc?" -- Elsie
(Feb 16, 2016) Hi Elsie, I haven't been to any yoga studio in QC so I can't suggest any. But if you look up "yoga, Quezon City" in Google, you'll see where the studios are. Yoga could help alleviate discomfort on your back. Good luck

Adrien Lemay
(Feb 14, 2016) Was realy a wonderfull session. Thanks Gigit for the workshop

»» next story: Exploring Guijo Street (Makati) Area
»» next Yoga story: Yoga at Thai Plum Village
»» back to Yoga
»» back to Homepage