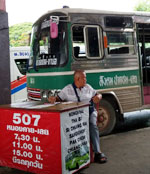 No Bus for Chiang Mai (CNX)
Because of the COVID lockdown, bus services were cancelled indefinitely beginning in March. With a 2-week mandatory quarantine period upon arrival in any destination, everyone was practically stranded. But when things started to ease up in mid-May, it was also a good time to return to Chiang Mai and resume my life since the annual burning season has already ended. I checked the bus for Chiang Mai. There were buses for Bangkok and Rayong and immediate provinces, but no bus for Chiang Mai. They said CNX services resume in June 1. When June 1 came, still no bus for CNX. This time, they said the lone night trip violates curfew hours. That I should wait until curfew is lifted. In June 15, curfew was lifted. Still no bus for CNX. This time, they said July 1. I've had it. It was frustrating to be played like a yoyo. I was restless in Nong Khai after having stayed 3.5 months.

Chiang Khan
I never knew Chiang Khan existed until 2 guests at Mut Mee Guest House started talking about it - river town like Nong Khai, charming walking street, etc. That was it. For lack of another place that excited me apart from Chiang Mai, I thought I'd follow my travel instinct. I could have gone to Bangkok or Rayong but it didn't have enough pull on me. But there was something about Chiang Khan that was getting my attention. What? I don't know, but only one way to find out.

Upon investigation at the bus terminal, it seems there's been changes. The 3 trips/day by the green bus have been reduced to 1 trip at 12 noon. Better, the stops indicated that from Pak Chom, it would go straight to Chiang Khan. Wow! That would reduce my travel time and effort by a lot! It was my green light to proceed with my plan. Not too many people know about this latest route - not even the hotel owner of Chill Pill. 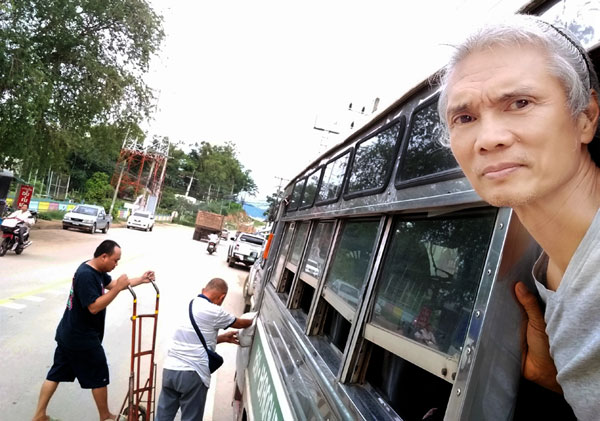 The Trip
The trip was definitely more scenic compared to going to Loei using the highway. Some sections were alongside the Mekong where you see its changing riverscape. It appears that the Mekong has more water in Nong Khai than here where it's upstream. The roads were paved, some double lanes, others 4 lanes. Towards Pak Chom and all the way to Chiang Khan, the trees lining up the road were lush and refreshing. Still, it was a gruelling 5-hour trip.

Interestingly, mid-way between Pak Chom and Chiang Khan, as I was the lone passenger left, the driver just pulled over into a residential garage and turned the engine off. Huh? Was he cutting trip since I was the only one left? No. He bid me to get my luggage and move it over to his nice Honda car. I guess he figured out that it was cheaper and more comfortable to drive the car to Chiang Khan instead of the big bus. BTW, he lived in that house. So, the trip all the way to Chiang Khan was in a comfortable air-conditioned car. Not bad. Despite being low on Baht, I tipped him extra. I'm alway generous to acts of kindness.

Reaching Chiang Khan
Arriving in Chiang Khan at 5pm after a 5-hour road trip, I felt a little weary, but there was still enough time to walk about town after checking-in. It felt good being here.

Ending Thoughts
I could have left Nong Khai earlier by taking any bus going anywhere. But I guess what kept me stuck was my apprehension of all the uncertainty that's out there during these COVID times. At Mut Mee, I was getting a very good deal. Would I be able to get this same deal elsewhere? I had to slap myself out of my hesitation.

What ever happened to the maverick traveler who braved crossing international borders with only $19 in his pocket? And here I am with enough money for a few more months, afraid to move from one province to another? Have I lost faith and trust on my benevolent universe? Have I become afraid and chose the safe route? I'm glad I caught myself veering into this madness.

As soon as I made the decision to leave Nong Khai, all the apprehension and hesitation disappeared. Positive signs sprinkled its way along the process - a new direct route from Nong Khai to Chiang Khan, cheap loding in Chiang Khan (B200/day). I was feeling excited again about writing a new chapter. 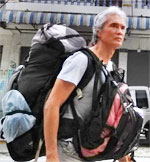 (Jun 18, 2020) Frustrated from the unavailability of bus service from Nong Khai to Chiang Mai, I just decided to take the bus for a place I just heard about in a conversation - Chiang Khan. It's a river town along the Mekong, 5 hours northeast from Nong Khai. What's there? I don't know. I don't care. I just needed to be out of Nong Khai.....more »»

»» next Traveling story: A First-Timer in Chiang Khan, Loei, Thailand
»» back to Traveling
»» back to Homepage