Busay Falls Access
To begin with, Busay Falls is only seen, not experienced. You either see it from the floating restaurant before it turns back or view it from the top while doing the zipline or cable car. For the more daring, you can actually go near Busay Falls on an SUP - but you usually take refuge in a tame eddy where you are safe from the strong current.

In a Nutshell
What we did was to trek down the slippery trail from the zipline station into the river bank, jump into the raging river, swim to the falls and go behind it! I'm not recommending this to anyone - specially not this rainy season when the river is high and the current is strong. 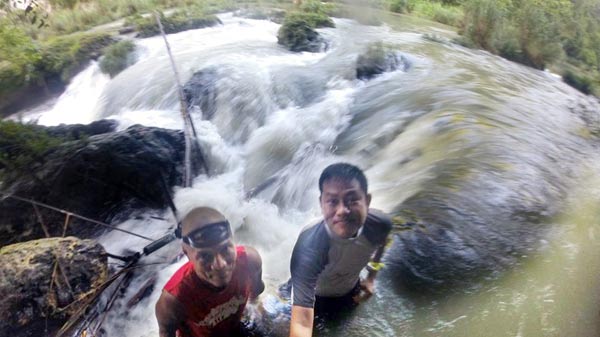 The Details
The trek down to the river from the zipline was too slippery with hardly anything to hold on to - best if you can get a disposable walking stick. It wasn't designed for people to go down to as it's not part of the tourism offering. Parts of the trail were gone and we had to blaze what seemed like the old trail - the forest already took over. From the elevated river bank, we jumped butt-and-back first so we don't go too deep and hit some rocks. And then we had to swim across the river against the strong current. My dive mask was only for eye protection - visibility was 2 inches! On the foot of the falls, we had to hang dearly on some rocks to get near the falls. And then we had to go behind the falls itself amid its pounding force pressing down on you.

5-Seater Cave
Jeffrey told me that while being on the inner side of the falls, you could actually dive down and enter a zero-visibility underwater cave and emerge on a clearing right inside the falls. Diving underwater in zero -visibility to enter a cave underneath a waterfall? This is fucked-up crazy! Inside the cave is pitch black except for the outside light underneath the water. This light illuminates your path back - so going back is easier than coming in. Jeffrey has done it and told me that inside, weird as it sounds, are 5 chairs for 5 people. Apparently, some strange people that been hanging out there in the past. No one in town know who these people are. In this current age, only Jeffrey went inside the cave even though locals have long known about it. I thought we would go inside as well - afterall, we already went on the inner side of the falls. But Jeffrey deemed the water too aggressive to attempt the dive under. In a way, I was relieved.

Busay Instik
An inner section of Busay Falls, hardly seen by anyone, with water more violent, is what the locals commonly call Busay Instik (Chinese Falls). Apparently, it has a penchant for Chinese tourists. How? Sorry, my lips are sealed (or ask me in private). Ask a local - you might get the story.

Cave behind Busay Instik
Underneath this waterfall is another cave - a bigger one. This cave has a fascinating story. I've heard 2 versions of it so far:

No one ever attempted to venture inside this bigger cave - or to even verify that there is really a big cave under Busay Instik. The pummeling water is simply too strong and the plunge pool is too deep for anyone to brave it.

Beaching ourselves on the other side of the river, we walked the riverside trail to Jimili-an Spring. The spring is occasionally dammed to irrigate the rice field. Mothers often take their kids to bath while they do laundry. For us, we simply took a short bath where the water plunges down into a pool with fortified rock walls. The plunge point makes for a good back massage. The water was cold with visibility at 2 feet.

Continuing with our trek along the river bank, we again jumped into the shallow part of the river from an elevated bank, butt/back first to cross the river to Loktob Spring. At this point, I was fatigued so swimming across the river and defying the strong current nearly wiped me out. The river at this point is about 5 meters deep.

Finally, we entered into Loktob Spring directly from the river. The inside of the spring area was full of submerged plants. It felt creepy swimming on it towards the water source as the plants grazed our chests and tangled with our arms. The water coming out of the spring was strong and cold. There is one deep section about 7ft-deep where you slide down your body on a small opening between some rocks. You could feel the spring water push you up. Still, visibility was around 1 foot.

Eskaya, the luxury resort in Panglao has already purchased the land in and around Loktob Spring and is already slowly developing the area. It is not clear what fate awaits this spring area, but their policy in Panglao should be a good benchmark.

We walked back home on foot - barefeet on my part as my flip-flop was mangled.

Ending Thoughts
This was an amazing adventure - not for the frail-hearted though. You can even go more extreme on this like venturing inside the small cave underneath Busay Falls in the summer when the river isn't raging. But save the big cave at Busay Instik to the professionals. This is not an offering by the tourism office or any private resort. Only Jeffrey can take you on this one. Feeling a little like Tarzan? Give this a try!

Thank you for another amazing adventure, Jeffrey!!!

If you ever attempt this, here are my tips:

(Nov 11, 2017) Taga Loboc din ako...from Gotozon. Once a child whose summer bathroom was LOCTOB SPRING.... I also went to busay with my cousin on a boat with just 1katig and it capsized, good thing we both knew how to swim.... But stories like these, with caves underneath busay falls truly amazed me....it's a surprise, a good one, of course, as I learned to Love these places as a child.... In fact, I miss it right now. Thanks for sharing this! God bless you, Sir, on your next adventures.... (From Daylin Acuña Arocha of Gotozon, Loboc, Bohol). :)

(Nov 11, 2017) Hi ! Adeline, you might not know me personally cause most of my life I'm living outside of Loboc.Not because I'm not really present at all time in Loboc that I could not recall some weird stories about Busay Falls. Reaching about your story inside a cave portion under the waterfall is really a fascinating adventure.Anyway according to some rumor that this cave have been used by some Pob.Sawang folks during the world war II. They hide those ladies inside this cave so that when the Japanese soldiers came into our town, they were safe from being captives by the enemy.There was also a story that a woman from this barrio next to Busay Falls have a pet crocodile and that the place of where this pet stayed during daytime is inside this cave.Only few residence here have knowledge of the crocodile existence.This is all I could add in this partiular cave...You don't have to believe me.but I'm just relating to you stories about this partiular cave under the Busay Falls.

(Nov 11, 2017) I am soooo happy Sir that you did not come back to me and tell me to eat my words with regards to choosing Loboc. Congrats Jeff for being a very good host. You really are a true blue Loboc Tourism staff. Cheers to all Lobocanons. Mabuhay ka Sir! Good luck and blessings to your next endeavour.

(Nov 15, 2017) your stories are always engaging and entertaining to read

37 Days in Loboc - Thank You and Goodbye

(Oct 8-Nov 14, 2017) When I arrived Loboc, I had no clue what to expect or what's in store for me. I didn't know anyone, didn't have a place to sleep and wasn't familiar to the place. It was just an obscure dot on a map. Now, 30 days after, I feel like leaving home behind - the wonderful people who opened their doors to me, the mountain bike trails I hammered on, the familiar carinderia I often spend breakfast and lunch at, Villagio Pizza for its wood-fired oven, the charming Loboc River....more »»

(Dec 4, 2017) Marooned by Ed Stafford is a reality tv series where survivalist Ed Stafford is left alone on an isolated and inhospitable environment for 10 days before his extraction. He has nothing but a first-aid kit and cameras - that's it! No film crew, no food, no water, no tools, no match. He not only has to survive but he has to thrive!....more »»

(Dec 18, 2017) Life continued at Fox and the Firefly with my single-minded focus on optimization. The resort already operates at a high standard with everything they do. I had to use a finer-tooth comb to uncover whatever blind spots there are. One such area is where my heart is - mountain biking...more »»