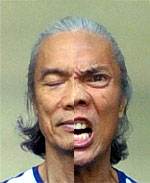 Anger
Despite my yoga, meditation and effort in walking the path, forgiveness is something I continue to struggle with. Let's all be human and face it - it's hard to forgive and even harder if the person deliberately did it and show no remorse. It's easier to put his balls in a nut-cracker! But when we let this anger or hatred keep residency inside us, who suffers? HIm? For all I care, he could be partying now while I'm feeling miserable because of something he did 10 years ago that cannot be undone. Doesn't make sense, does it?

Pain and the Hurt
As we go through life we meet people who hurt us...sometimes deliberately and show no remorse. Sometimes, even with best of intentions, shit still happens and we get hurt again. But that's life. Nobody needs to take the blame, but we feel the need to point a finger at someone. We have no control of what happens outside. But how we deal with it, is something we can fully control - we have a choice.

Poison within the Body
One choice is to let the pain ferment and fester in our system. Most people do that. For some, it feels good. We put ourselves on a moral pedestal, claiming, "I'd been wronged, life owes me." It's a personal drama people play up. It can be addicting. That's also why some people stay in abusive relationships.

But while we're stuck with this anger, we cannot be happy. It's difficult to be happy when you harbor such bitterness inside you. It's hard to move on. Yet we carry this burden for many years or sometimes, indefinitely.

Why We Should Forgive
Another choice is to forgive. But forgiveness is hard. If it were easy, everybody would be forgiving. So let us forgive not for their sake, but for our sake. Forgive with no expectation of apology. Do it just because it's about us...not about this guy. Because when we forgive, we begin to heal and we put the past in its rightful place. We create space for love to shine even the most painful of places.

When we don't Forgive
When we cannot forgive, we sustain the negative bond that tethers you to that person - you eat with him, you sleep with him, spend your day with him and see him first thing when you wake up in the morning. This person who hurt you. Only forgiveness melts that chain and allows you to move on, free of that person. Dealing with Anger gives you freedom.

Dealing with Anger doesn't mean what they did was ok...it means we simply let go because the past cannot be undone. Dealing with Anger is me giving up my intention to hurt this guy, for hurting me. But again, forgiveness is not easy. It is only for the strong and the brave. Because a weak person cannot forgive.

As Mark Twain said, "Dealing with Anger is the fragrance the flower sheds on the heel that has crushed it."

Ending Thoughts
When we forgive, we unshackle our bondage from bitterness. The first person to benefit from our forgiveness is ourselves. It clears stuck energies, allowing us to move on.

Michael Fazackerley
(Jun 18, 2018) Great words my friend. What I have been learning is that not only can this be addicting. This is the root of addiction. The effort to smother or escape from what we cannot let go of fuels addictions of every kind.

TheLoneRider
(Jun 18, 2018) Indeed, my friend. We see if everyday. But not all those words are mine. I had to look out there for inspiring words about forgiveness and stumbled upon them.