Note: Out of respect for the intentions of the retreat, I am not disclosing the play-by-play of what took place. It's useless anyway. Vipassana has to be appreciated from an experiential level - not just intellectual. 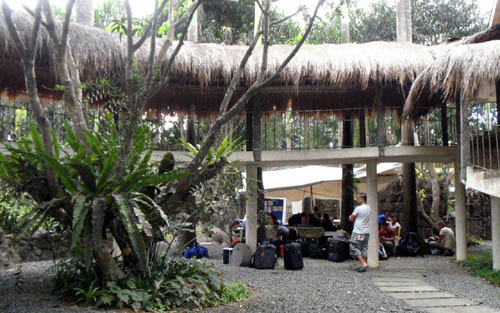 Ignorance is Bliss
I barely arrived from my backpacking when I learned my application to take part in a silent meditation retreat was accepted. My friends who have participated in such spiritual undertakings in Canada could only say positive things about it. My only expectation was that I'll be in a secluded area for 10 days without talking to anyone. Apart from that, I knew nothing more...which turned out to be a good thing.

What is Vipassana?
At first, I could not even pronounce the word. I thought it was an indian word for silent meditation. It was explained in the retreat that it was Gautama Siddharta himself who developed this technique 2500 years ago. Yes, it's just a technique. No talk of God, no ritual, no dogma, non-sectarian (no ties with Buddhism) and absolutely universal. It doesn't matter if you're rich, poor, young, old, saintly, sinner, male, female, Catholic, Muslim, Jew, etc. It's for everyone who desires to live a peaceful, harmonious and happy life, devoid of misery and all its trappings.

Missing Link
Apparently, Siddharta realized that after going through all the teachings of his time, learning from mystics, scholars and learned spiritual elders, he could not attain enlightenment...he could not be a Buddha (the Enlightened One). There was a missing link. He was close, but still enlightenment proved out of reach. Having sourced everything around him and failed, he searched inside. Through hard sincere work, devotion and persistence, he developed a meditation technique that took him to the deepest levels of his mind, breaking down the solid constructs of the mind-matter layer and into the more subtle realms where he exorcised craving and aversion from their roots (not just from epidermal manifestations). It was a purifying process that ultimately led him to liberation - finally becoming a Buddha.

Universal Law
Siddharta was no divinity and he never claimed to be such. His becoming a Buddha was partially brought about by his development of Vipassana in compliance to the natural laws of this universe. The law is the same law we have now. It hasn't changed. Being regular guys, our chances of becoming a Buddha is not diminished if we practise the technique in compliance with this universal law. The playing field is level.

Falling Through the Cracks
300 years after Siddharta's death, Vipassana was spread by its loyal practitioners across the world (including Burma). It languished and nearly fell into the ranks of the lost art. Why? Vipassana was not preserved in its original form. Yogic breathing exercises were mixed with it, visualization was integrated, mantras chanted...all deviating from the core tenets of Vipassana which is to experience everything the way they naturally are. Mongrel Vipassana didn't work. Thus people stopped practising and the technique was lost through the ages...almost.

Preserved Vipassana
Fortunately, Vipassana was preserved in its original form in Burma, but not with a grandiose following. It was carried out from generation to generation, from teacher to pupil in small numbers. It remained an obscure practice until 1970, when SN Goenka, a devoted student (an Indian who grew up in Burma) was appointed to spread Vipassana. He took the practice back to India where it flourished. From there, Vipassana spread across the world. To date, SN Goenka remains the head of the Vipassana movement.

10-Day Course
Without giving the course away, this is what takes place. For 10 days, we were not to talk to anyone (Noble Silence), to sit comfortably for a minimum of 10 hours a day and meditate with our eyes closed, hardly moving. For 10 days that's all the physical thing we do, which is essentially nothing. SN Goenka, through video, provides a 75-minute discourse once a day. 10 days just you and your mind... with nothing and no one else...no cell phones, no digicams, no laptops...nothing - just you and your mind. You get to know your mind like you never have. You miraculously come out of it a changed person. It sounds easy, but trust me, it's not! Climbing Mt. Apo and Mt. Pulag combined, 2 of the highest peaks in the country, in full heavy gear is a lot easier.

Full of Garbage
After continuous meditation for days, I became increasingly inundated by too much garbage from the past. It would seem like forgotten hurts and anger (those swept under the rug), were being brought back to the surface. It was unpleasant, but I begin to understand that these issues need to come out first before they can be exorcised.

Prison Inmates
Just how powerful is Vipassana? Well, it was enough to enlighten Siddharta. But he's a saintly person to begin with. Maybe it was easier for him. In India, experiments were done to introduce Vipassana to a group of hardened criminals. These were the worst of the bad - people who had to be shackled on all fours every time they leave their cells. Sitting still 10 hours a day for 10 days, they came out crying, remorseful for all the crimes they committed against society. They insisted on begging forgiveness to the families whose members they killed. Some have gone on to live saintly lives. Today, Vipassana is mandatory in all of India's prisons. That's Vipassana.

SN Goenka
Goenka is probably in his 80s now. Given the courses happening across the planet day-to-day, it's no longer possible for him to conduct the classes personally. He makes himself available to us through the video discourses given everyday. It's brilliant. The magic of Vipassana rests in its purity. By having the discourse come directly from Goenka (but facilitated by a certified teacher), everything is preserved. The teachings are the same everywhere.

Guru My Ass
Goenka resonates with me. Through his taped discourses, I see a compassionate man whose aim is to spread Vipassana because he believes in the wonders it can do to humankind. I didn't get a sense of ego, no sense of proprietary branding...just compassion. It's not everyday I feel that way about a guru.

Don't get me wrong. I'm not a sucker for these things. When someone presents himself as a guru, my skeptical reaction is "...yeah, guru my ass". But Goenka is the real deal for me. The last time I felt privileged to be learning from a guru is with Amma, the hugging saint.

Critical Thinking
Lately, I've become a spiritual junkie but remains mindful of critical thinking. I go to just about every meditation workshop, spiritual retreat, yoga seminar, always in search of even the smallest morsel of knowledge that adds another jigsaw piece to the bigger picture. Always, however, I suspend my belief until a few things are met. Whatever I ingest, I carefully sift and sift some more ensuring that it's consistent with my own tenets of life. It has to remain real, logical and viable, given my life experience. The thinking process has to remain on overdrive. As one elder once said to me, the head is not just a place to grow hair.

Conflicted
Having processed Vipassana, I'm left conflicted about some of its ideology. Off hand, I agree with everything Vipassana advocates...except on 2 items - craving and fitness.

Craving
Vipassana considers craving as a source of misery and therefore should be avoided at all cost. To me, craving is good. I live life to the fullest in vivid color across its full spectrum. To walk away from things I desire is to me, to flat-line. If I want to desensitize myself of life's offerings, I'll just take Prozac...no offense. As I said during my Empath Yoga program, to sustain my bliss, I need to keep my madness.

A Lamborghini Paradigm
If I desire a Lamborghini (which I still do), then I'll find ways to acquire a Lamborghini (which I did through online day trading....I lost everything but the shirt on my back). Nothing wrong in that. The misery lies in the attachment, not in the craving nor the acquisition. If I can come to terms with the impermanence of the Lamborghini (that it might be stolen or burned or taken from me), then losing it falls neatly in the natural order of things...no biggie and no misery. If I can also come to terms that no matter how I try to acquire a Lamborghini, I may never really get to own one. So if it doesn't materialize, no biggie...no misery.

Fitness
During the retreat, exercise was discouraged. I can see why. It may prove distracting, given that the aim of the course is to be with just the mind. I'm not sure if it's limited to the course only. But I've seen video footages of venerable Buddhist elders who are as close to enlightenment as it gets. Spiritually, I could just imagine they've attained dizzying heights. But what grabbed my attention was that they were all bent, twisted and had to be carried up. Have they pursued spirituality and somehow neglected the needs of the body? I'd been a fitness buff almost all my life. Through fitness, I get to climb mountain summits, take on mountain bike races, dive deep and long with a single breath. Quality of life is immeasurably enhanced with a sound body, not to mention that sound body translates to a sound mind. And if consciousness is everything, then sound mind is a sound sense of the collective universe we're all a part of. Again, no offense.

Thank You
I am grateful for Burma for keeping this tradition pure, and for safeguarding it through the ages. I am awed and humbled by the compassion and sincerity of SN Goenka...another magnificent life whose orbit I've drifted into. I feel privileged to have participated in this course. To express my gratitude, I already volunteered as server to the next batch.

Ending Thoughts
Unlike some nouveau-consciousness in this new-age era (again, nothing wrong with that), Vipassana has been around for 2500 years, developed by no less than Gautama Siddharta. Through its history, it has helped countless in the quest for real peace, real harmony and real happiness. Despite being conflicted on a couple of issues, I have no doubt Vipassana will be part and parcel of how I do things in life from hereon. Already, it has explained a few things I needed clarity with. Furthermore, Vipassana also serves as blueprint for the road up ahead. I continue to pursue my desires (earthly and otherwise) and ironically, Vipassana is key in attaining them.

Jim Ward
(May 1, 2009) Attending one of these sessions has been on my radar for many years now. As always, your blog has brought another opportunity to light with clarity and humor.

Dennis Manonog
(Apr 28, 2009) I first heard about Vipassana while reading a book during my trip to India. Ten days of silent treatment isn't for everyone. I heard stories of participants crying and not completing it. Congratulations on having done this - you're on your way to attaining your hopes and aspirations.

(Oct 21 - Nov 1, 2009) Serving at a 10-Day Vipassana Silent Meditation Course at Dhama Pala (Philippines) in the tradition of Sayagyi U Ba Khin as taught by SN Goenka....more »»