In Search of Guiwanon Cold Spring

Off to Tabogon
From Bogo City, the next logical southbound destination seemed Tabogon, another obscure destination on the east coast of Cebu Island. What made it appealing was Guiwanon Cold Spring. After Malumpati Spring and Hurom Hurom Spring from Panay, I was a big fan of cold springs. Tabogon, here I come!

Road to Tabogon
Odd, but even though Tabogon is just the next municipality directly south of Bogo, there was no direct transport to Tabogon. Instead, I took a Cebu City bound Ceres bus and got off at the Ilihan junction (P23, 40 min) where I boarded a single motorcycle (habal-habal) for Tabogon proper (P50). The habal-habal ride took me deep into the interior towards the coast, going through rolling landscapes with lush green scenery. The ride itself was captivating even though we had to go over muddy dirt roads under construction. Tabogon looked promising. 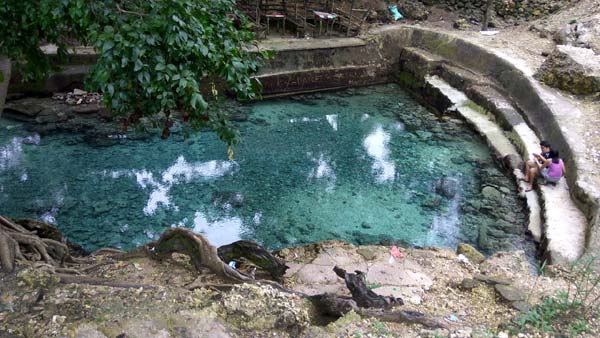 sadly, Guiwanon Cold Spring was closed for cleaning when I arrived

Sea Turtle Lagoon Resort
I wasn't sure if there was lodging in Guiwanon Spring, so I asked the driver to take me to Arpons Resort in Tagasa Beach, which I saw on the map. We searched for it but apparently it didn't exist - the map was wrong. Tagasa Beach wasn't much of a beach either. We tried looking for possible lodging but we were pointed to only one place - the Sea Turtle Lagoon Resort which was still quite a drive away north along the scenic coast. We finally arrived at this expansive resort with an elevation overlooking the water. It was magnificent. But lodging was P2500/night. The owner wasn't around so I couldn't make a web deal. It was a deal breaker. There was no where else to sleep in Tabogon!

Off to Guiwanon Cold Spring
Instead, I asked the driver to take me south to the spring instead and I'll just figure out where I sleep from there. After some driving, we finally got there, only to find out it was closed for cleaning! All that effort for nothing? It was frustrating to say the least. Nonetheless, I went inside just to take a look. The spring was immaculately clear! The water comes out of the rocks into a man-made pool and empties out into the adjacent sea. Except for 2 people, it was empty. It would have been a cool place for a dip. As for infrastructure though, it was for the locals. It would take a lot of work to make it foreigner-ready for commercial tourism, although the potential is there.

Bunzie's Cove
Still, the pressing question was, where do I sleep? The driver continued going south along the main highway until we came upon Bunzie's Cove. At a price tag of P5,000/night, it was another plush resort. Again, the owner wasn't there so there was no way for me to offer a web deal - another deal breaker. I was back to the same question. With no affordable lodging, where do I sleep?

Heading South
Frustrated, I let go of the driver after paying him P200 for all the driving he did for me. Fortunately, buses ply the coastal highway from Tabogon to Cebu City (so, why not have a bus route that goes all the way to Bogo from Cebu City via Tabogon?). I flagged down the next bus not knowing where I get off. I was looking at Maps.Me (an map app that works offline) figuring out all the town the route would pass through and where I could possibly get off for a night's stay. Tagnugan? Campusong? Sogod? Tabunok? Damolog? I didn't know these places, but I see them on the map.

Carmen
All the towns the bus passed through looked charming to me, but too small to have a guesthouse. When the bus passed through Carmen, it looked progressive enough to have a guesthouse. I got off and started asking around. Apparently they only have boarding houses. I was pointed to several directions which I walked to with my heavy and bulky luggage but all of them were either full or demanding a monthly rental. I was exhausted from all that with no place to sleep. Why is there no simply lodging in these small towns? Where do salespeople stay in these towns if they have to stay a few days there? Borne out of frustration, there was a lot of self-talk happening inside my mind.

Danao
Someone suggested I go to Danao - that there might be lodging. I boarded a tricycle to the next town, Danao, hoping I would be in luck.

Ending Thoughts
Nothing worked for me on this travel leg. NOTHING! There was no Arpons Resort, Sea Turtle Resort and Bunzie's Cove were too pricey, Guiwanon Spring was closed and there was no lodging in Carmen! This is classic Murphy's Law - everything that could possibly go wrong, simply went wrong. Contrary to popular belief, traveling is not all fun. It could be a lot of frustrating work with nothing to show for at the end of the day. This is one of them and that's just how it is. On an optimistic note, maybe there is something in Danao.

There is one thing about going to Tabogon though. If you want a road trip by a scenic coastline where you sit by the bus window watching the changing landscape, then you can board the Ceres bus from Cebu City going to Tabogon. Make sure you take the front-most seat on the right side of the bus.

Next stop: Defaulting to Danao

How to Get to Tabogon from Bogo City