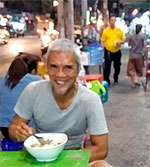 The FLOW
After the void of Sukhothai and Phitsanulok, I began to question what the heck I was traveling for. But when I reached Udon Thani, I felt the same surge of energy I felt in Chiang Mai. It was the familiar tap on the shoulder by my benevolent universe, letting me know there'll be good times ahead. True enough, within 24 hours of arriving, I already bartered a hotel deal, cooking class workshop and movie nights. I was once again into the FLOW! 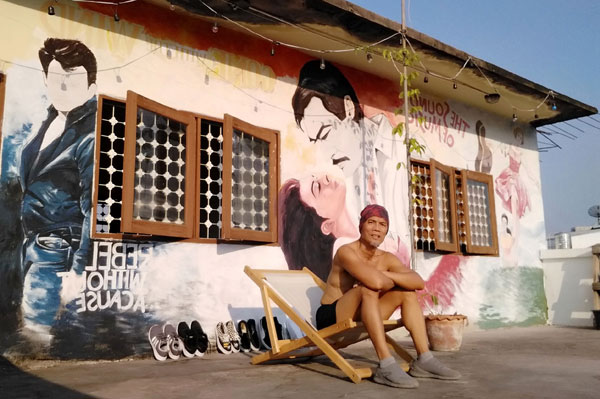 Oldie and Sleepy Hostel
Like my hostel in Mae Sot, Sleep Nest Hostel, Oldie and Sleepy Hostel was a hipsterish hostel with a youthful stride to it. It has The Beatles theme to it's branding with mural paintings, posters and the written word. The hostel is clean and well maintained by its friendly staff. They have an open roof deck where I can do my morning workout. The energy is positive and engaging. It's run by a lovely young couple who are forward-thinking and forward-moving. They liked my barter proposal and we shook hands on the accommodation deal. That was a big relief for me. I didn't have to keep packing and unpacking and take long bus rides across Thailand. Instead, I gain time to finish all my online loose ends including a new software review writing gig. I also get to conserve my remaining cash.

Peoplescape at Oldie and Sleepy Hostel
Like most travel experiences, the highlight is always with people. Even though Udon Thani doesn't have too many travelers, Oldie and Sleepy is not short on interesting hostel guests. While hanging-out on the premises, I inevitably stumbled upon a few of them.

Caleb was fresh from his 3-week meditation retreat from Wat Phu Khong Tong. As a fellow meditator, we defaulted into Buddhism, Dhamma and meditation talk. He has done a 3-month marathon retreat and well-versed into the Buddhist vernacular. We agree on many things, but I noticed he had his reservation about the Goenka tradition (like many others), to which I am a devotee of. I asked why and he gave his logical reasons - all of which I addressed. I had been noticing that almost 99% of the time, any meditator critical of the Goenka tradition, has not tried it. There is a reason why the Goenka tradition now has 341 centers in 94 countries - all in one lifetime! Because it works.

Sandro was engaging. He used to be a bassist in a punk rock band in Switzerland. He talked about dysfunctionality happening in his country which he asserts is reflective of Europe. He claims that with the current pace in Switzerland, people are reduced to robots - work, beer, sleep and wake up the following day to continue the loop in a vicious cycle. He talked about people who just cocooned themselves for weeks inside a room just playing a video game. Or bright people who are walking encyclopedias about a very specific subject matter - music, but cannot function in society. I can't forget what he said, "My country is picture-perfect. It makes a great postcard. But if your son kills himself by jumping on an oncoming train, you get billed for cleaning up the mess. If you don't pay that bill now, the next bill will add interest on your unpaid bill until it piles up and you cannot pay it anymore. Then you kill yourself too. We have one of the highest suicide rates in the world."

Usually, people who describe their environment and people they associate themselves to, essentially belong to that flock. But Sandro seemed adjusted, logical and smart. Even jovial if I may add.

A Christian from Montana

He was a Donald Trump supporter, although he seemed to be balanced with his perspective on things. And I agree with what he said that your opinion of Donald Trump will be shaped on which media outlet you patronize. Listen to Fox and Trump is the next big thing since sliced bread. Listen to Bill Maher, RT or the Young Turks, and Trump is a stupid embarrassment to the American people. We talked largely Americana - the preppers, the vision of the founding fathers, the emergent elite who now control politics, media, the economy and can manipulate public opinion. We could have talked forever until I felt that he was marginally evangelizing already.

He started off the conversation as a very sad traveler for being separated from 1 girl he was intimate with during his travels. If he could just slice his wrist, he probably would have done so. We continued to talk and I somehow offered some Buddhist teachings that were relevant - staying present, gratitude, flat-lining, etc. Almost after explaining one thing to him, he would glow and shake my hand, grateful for the alternative perspective I passed on. At the end of it, I told him that if he shook my hand one more time, it was already going to cost him. We laughed. By the time he left for Laos, he wasn't sad anymore.

Udon Thani City Center
With barely just a few days here, I could already feel the potential of what it's like to live here. This is really a working city - not so much a tourist destination, but a place to settle down, make a living and perhaps, even prosper. There is industry as can be seen in shophouses lining up the main thoroughfares. I haven't seen a place with so many bicycle shops, but oddly, I don't see bicycle commuters on the street. Who are buying these bicycles, and where do they use it? Not readily apparent but a lot of its inhabitants come from a Chinese and Vietnamese descent. There have been 3 waves of Vietnamese diaspora with as much as 46,000 Vietnamese in 1945, escaping the horrors of World War II. They have all settled down here and inter-married with the Thai locals, changing the city's cultural landscape irreversibly. I counted 4 cinema centers, the biggest of which is the Central Plaza Mall with 8 movie houses. That says a lot about the dynamic elements of the city.

Ending Thoughts
There is much to experience in Udon Thani. Given my remaining days, I can only feel more optimistic. Already, I could see myself immersed in food, culture and whatever it is around the bend. Unlike Sukhothai and Phitsanulok where I wanted to leave immediately as soon as I arrived, here in Udon Thani, I find another excuse to stay longer.

»» next story: Movie Review: Parasite
»» next Traveling story: Vientiane Revisited
»» back to Traveling
»» back to Homepage