Philippines Here and Now
I come from a country where our educated leave their family and country to be domestic helpers, nannies or workers in other countries, doing a job that is beneath their educational attainment. It hurts. With over 80% of the population living below the poverty line, politicians have the gall to plunder the treasury as in the case of the Napoles pork barrel scam that funneled public funds in the amount of P10B (US$230M) into the personal pockets of our senators, congressmen and mayors - Enrile, Estrada and Revilla (2 of them former screen actors) to name the apex 3. Corruption is not only widespread but has permeated deep down into the moral fabric of society. Housing shortage has long reached alarming levels but with nothing done, people are left with resignation that nothing can be done. The economy is rigged to keep the people poor and the public educational system is designed to keep the people ignorant. Why? Because you keep a person poor and ignorant enough and you can get a vote by doing a song and dance number and throwing in P500 (US$12)come election time. They won't know the difference. They'll even think you're Robin Hood. With so much resources, the Philippines remain poor because of the inept and corrupt public officials who run the country.

Singapore Here and Now
Singapore on the other hand enjoys first rate transportation and telecommunication facilities with high speed internet as a norm. It has the 3rd highest GDP/capita on the planet. It's public housing provides a roof to 90% of its population, complete with recreational and sports amenities, food courts, shophouses, making it a self-contained satellite city - there are no squatters in Singapore and there is no corruption in Singapore. Nobody would throw their litter on the street and no one will ever counter flow. Discipline and mindfulness is ingrained in them that they are part of the nation-building process. 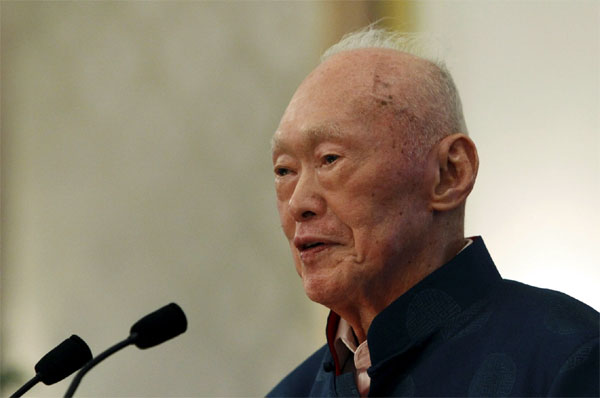 Philippines and Singapore Back in the Day
What I find uncanny about these two countries is that at one point in time, not very long ago, Philippines and Singapore were on the same level - social unrest, decaying infrastructure, widespread corruption, high unemployment and sluggish economic growth. The great disparity between these 2 countries only underscore what a strong, dedicated and HONEST leadership can do to move a country forward. In the 30 days I stayed in Singapore, I witnessed and experienced first hand the prosperity and success of Singapore. I cannot help but speculate that with able leadership, the Philippines could have been this. Lee Kuan Yew proved that it is humanly possible to achieve this in one generation.

A Tribute
With his passing, I write this article to honor him...a look at the man...this rarest of the rare...who dedicated his life in the service of country. I have said this many times, I will say it again, Singapore is lucky to have such a man.

Inseparable
Singapore and Lee Kuan Yew are synonymous - it's hard to mention one without reference to the other. It's almost like they had an umbilical cord that bound them together for 5 decades. Lee Kuan Yew is modern Singapore's founding father and the longest reigning prime minister from 1959 to 1990. He continued his public service long after he stepped down as prime minister. With his strong and forward-thinking leadership, he steered Singapore from an underdeveloped colonial outpost suffering from high unemployment rate, severe housing shortage problem, decaying infrastructure, social unrest and widespread corruption - into an ultra modern city state with the highest Asian GDP, its public housing program emulated by several countries, moral work ethics defined by giving your task an honest day's work, crime rate so low for any urban metropolis, first rate transportation system and an interactive citizenry mindful they are part of the nation-building process.

Destined for Greater Things
Even as a young student, Lee exhibited his capacity for greater things. He was always at the top of his class. One of his teachers prophesied that Lee will "do well, unusually well" and attain "a high place in life". When he sat for the Senior Cambridge Examination in 1939, he emerged as the top student for the whole of Malaya. He finished law at Cambridge University with academic distinction. He would soon blaze the trail in moulding a city port into an unprecedented first world city state.

Radicalized
At age 19, when the Japanese occupied Singapore during WWII, Lee's political awakening was sparked. He realized that Singapore should rid itself of foreign colonizers - both the British and the Japanese. Independence became his resolve and pushing Singapore forward to self-rule and self-sufficiency became his mandate. He had that opportunity in the 3 decades he governed as prime minister.

Tough Guy of Asia
Lee's political resolve and strength of conviction saw Singapore through trying times. His resolve was tested during the face-down episodes against the Communists in the late 1950s, his withdrawal from the Federation of Malaysia and upholding the rule of law in the face of mounting US pressure in the caning of American Michael Fay for vandalism.

Visionary
Not only is Lee tough but brilliant as well. With no natural resources but having deep and protected waters to attract foreign merchant ships, Lee made Singapore a free port. This move has resulted in Singapore's port to be connected to 600 ports in 126 countries covering 6 continents, ranking Singapore the 2nd busiest port in terms of shipping tonnage. Lee through the help of his lawyer wife, settled Singapore's water dependency to Malaysia by legislating the water deal to be integrated into Malaysia's constitution. This move guarantees Singapore's water supply as overseen by the United Nation's Security Council. According to one Malaysian I talked to, Malaysia is duty-bound to sell cheap water to Singapore, which Singapore filters and bottles and sells back to Malaysia at a handsome profit.

Ending Thoughts
I could go on and on why Lee Kuan Yew is Fab People. His legacy permeates through Singapore's very foundation. The empirical numbers stand tall of Singapore's achievements and the ubiquitous public housing draping the landscape of Singapore manifests the milestones of what used to be squatters and squalid shophouses. Multitude of Singaporeans waited in line for hours upon hours getting a last glimpse of this father figure, summarizing in a snapshot the reverence, gratitude and loss of a nation to one who has given all for the greater good of Singapore.

You have done so much in your lifetime, Mr. Prime Minister. Not just Singapore, but the whole world feels its loss with your passing. Rest in Peace.

Ricky Soler Jr
(Mar 29, 2015) No. You are wrong. I have to disagree. The Philippines was not at the same level, we were in fact, way ahead and advance in so many ways than Singapore. We missed the boat so many times and Singapore got it right the first time.

TheLoneRider
"The Philippines was not at the same level, we were in fact, way ahead and advance in so many ways than Singapore" -- Ricky Andaya Soler
(Mar 29, 2015) I was being conservative, Ricky. You are absolutely right. According to 'benign0', Singapore was "...shunned by the Malay Federation, menaced by Indonesia, and abandoned by the British Empire, Lee Kuan Yew took leadership of a state that had very reasonable excuses to curl up on the floor and fail. It had none of the essential natural resources needed to industrialize, was wracked by internal ethnic strife, and lacked an identity beyond its former status as a Malay Federation state". Even Lee Kuan Yew, in his own words said, "In the 1950s and 1960s, it (Philippines) was the most developed, because America had been generous in rehabilitating the country after the war". Indeed we missed the boat too many times.

Ricky Soler Jr
(Mar 29, 2015) Sayang talaga. I want to cry just thinking about it. If you take a look at the ordinary middle class Singaporean and compare them with the ordinary middle class Filipino malayo tayo in terms of intellect and social aspects, not to demean them in anyway but in fact I look up, respect and even envy them. Pero tayo we are too smart for our own good... sadly it did not do us any good.

Boracay SandCastles
(Mar 30, 2015) Wish we had someone like Lee Kuan Yew! What a shame that Marcos used his brains to corrupt everyone from the grassroots level up to the highest government position.

TheLoneRider
"Marcos used his brains to corrupt everyone from the grassroots level up to the highest government position" -- Viveca Hutchinson
(Mar 30, 2015) Exactly my thoughts. Marcos could have been the one guy to see the Philippines through. Like Lee Kuan Yew, he was brilliant, he was a strong man who had political will to get things done, he was charming and could command the loyalty of people around him, etc. But at the end of the day, Marcos turned out to be nothing more than a common thief who robbed his country blind. Worse, he set the precedent to institutionalize corruption in the country.

Next stop: 20 Days in Saigon