Cambodian Friends
With my Vipassana friends from Cambodia, we set out to explore Kuantan. First on the list was the Mini Zoo, then Teluk Cempedak.

Getting There
Kuantan Mini Zoo is adjacent to the beach, Teluk Cempedak, so it's best to do both in one visit. To get to both requires riding the same bus and getting off on the last stop. From that stop, it's a hot 1.1km walk to the zoo - I don't know why tourism doesn't offer a shuttle.

Wildlife
As the name goes, it really is a mini-zoo with a few animals - peacock, iguana, deer and rabbits. There are wild monkeys who seem to be afraid of people (in contrast to the monkeys of Teluk Cempedak who are aggressive). And there is the lone monkey on a moated islet, hanging on tree branches like Tarzan. 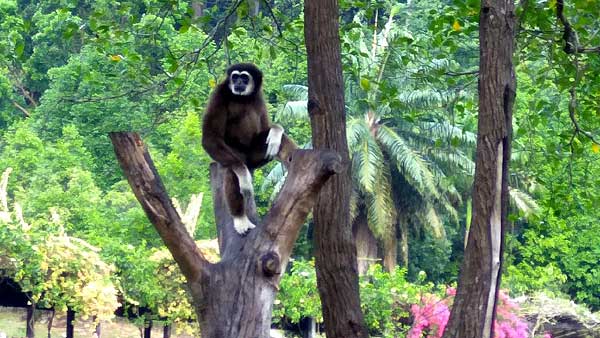 Park
The entire area is a semi-manicured park system with enough expanse for a leisurely stroll when the sun goes down. Rolling out a picnic mat would seem like a good idea, but it didn't seem to be the convention at that place.

Ending Thoughts
The Kuantan Mini-Zoo is best taken as a manicured park with lots of open space where it would be great to spend an afternoon walk in, when the sun is not so hot. And then be treated to a few animals who call it home.

How to get to the Mini-Zoo from Kuantan town center

»» next Traveling story: Beach Fun at Teluk Cempedak
»» back to Traveling
»» back to Homepage