Hanging-Out in Kuantan with the Guangzhou 5

Hitching a Ride to Kuantan
After the Vipassana course, I got a lift from Lee, a fellow meditator and a resident of Kuantan. We were joined by other participants, particularly, 5 Chinese ladies from Guangzhou, China, who came all the way for the Satipatthana course. We stopped by a restaurant for some sumptuous curry then spent some time in Lee's house for tea where we discovered common ground in yoga. We ended up taking turns doing asanas! They later took me to my lodging place, Kuantan Backpackers, to check-in, but I still joined them until the Guangzhou 5 checked-in at Rocana Hotel.

Guangzhou 5
Lee already left us at Rocana Hotel, but I still hung-out with the 5 ladies - most of them in their 50s except Xiaojing who was 26, and the only one who can speak a rudimentary English. We talked about yoga as they were all yoga practitioners. Later that afternoon, they still tagged me along for a walk to the river esplanade. This was followed by dinner. They again invited me to join them for breakfast the following day after doing a yoga class. 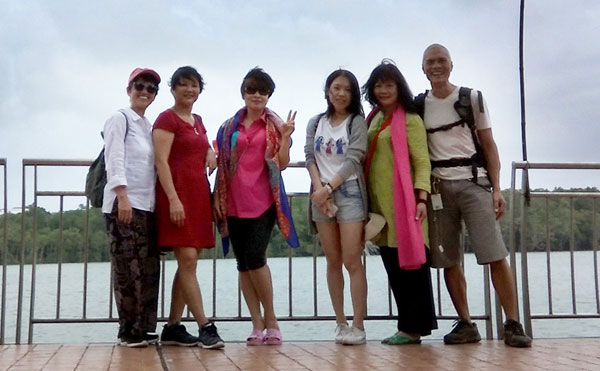 Feisty Ladies
Although the 4 were in their 50s, they all had this youthful bounce in them. The oldest, 62, didn't look a day over 50! And she did a headstand! They're also feisty, telling off the local shop keeper when they thought something wasn't in order. I enjoyed their company as I felt they enjoyed mine.

Ending Thoughts
They had to leave on the 3rd day but I really enjoyed being with them, despite the language difficulty. They extended an invite for me to visit them in Guangshou to be their English and Yoga teacher. How nice! But I think I'll have to learn Chinese first.

I just hitched a ride to Kuantan not knowing what awaited me - I didn't know anyone, didn't speak the local language and didn't know the place. Who would expect I'd get tagged along for 2 days by 5 ladies who hardly spoke English? Whoa! This is what I like about traveling...you let go and magical things spontaneously happen.

»» next Traveling story: Exploring Kuantan, Malaysia
»» back to Traveling
»» back to Homepage