The 24-Hr Trip from Loboc (Philippines) to Gambang (Malaysia)

Vipassna Meditation Course
With my acceptance into the 10-day Vipassana Meditation course, I had to leave the Philippines one more time and go to Gambang, Malaysia.

Planning
Given my 19 months of inactivity with overseas travel, I was careful to cover all my bases before leaving the Philippines - just in case I got rusty. I tried to be as thorough as possible - booked my lodging and plane flight, timed the journey so I don't miss any of the transport transfers, changed my money into Malaysian ringit and US dollar, even had my bookings printed, did the web-checkin, etc. I was confident I got it all covered.

Painless Travel
I left Loboc at 4pm Mar 15 to catch my 10:30pm boat from Tagbilaran to Cebu City (P275, 5.5 hours). I even had ample time to hangout at Country Cafe for last-minute online postings. Because I arrived at 4am in Cebu City, the cab ride to the airport was traffic-free (P240). So far, everything was painless. It was at the airport check-in that shit hit the fan. 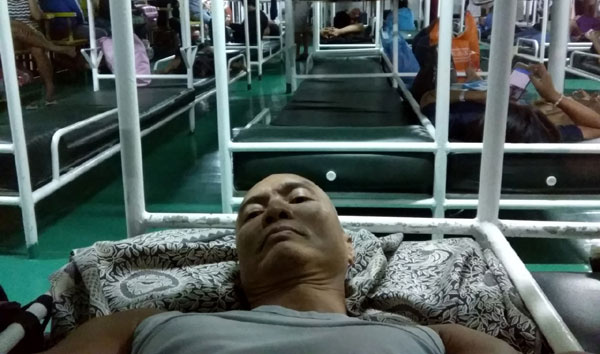 Onward Flight Snag
I thought I covered all my bases, but I was mistaken. I had my Cebu-Malaysia and my Malaysia-Kathmandu plane bookings which I showed to the Air Asia counter guy. But what he wanted to see was my return flight back to the Philippines. Oh shit! I didn't have any because I didn't know when I'd be coming back. I explained the situation but the guy would give me any slack. I asked to see his manager, but the manager wasn't there. I didn't have a lot of time left before boarding call, so the pressure was up. What to do? I asked him to book me for a return flight (knowing I would change it anyway), but with a P1500 penalty for changing a booking, it became out of the question. Pressure was building up.

I suddenly remembered this Next Flight website that makes booking reservations for US10. They would expeditiously email the reservation number with flight details which I can then present to Air Asia or immigration. I've used this approach many times before in different countries and it always worked. The thing is, you kiss your US10 goodbye - but that's better than paying a P1500 penalty for a confirmed booking, or worse, missing your flight altogether! Within 20 minutes, I was able to present the email showing my flight reservation. That solved the problem....whew!!!

Travel Tax/Airport Terminal Tax Snag
I thought it was smooth sailing until I told to pay P2500 in travel tax and airport terminal fee. But I only saved enough pesos for the cab ride! I completely forgot about those other charges. Oh shit! Where do I get the money? I had no choice but to change back my dollars into pesos.

Currency Snag
But when I asked where the money changer was, I was told to go outside the check-in area for it. But I didn't have enough time left to go outside and line-up. What to do? I approached 2 Filipinas and explained my situation. I asked them if they would be kind enough to change my dollars into pesos. I was so relieved they said yes. With that, I got my pesos, paid the tax and terminal fee, had barely enough time to board the plane and we took off. Wow...that was a close call.

Sari, the Japanese Passenger
Inside the plane, I was seated next to a lovely traveler. We talked and I learned she was Japanese who took a 3 month residency in Cebu to learn English. We talked the entire time which made for a pleasant flight. I gave her my contact info but haven't heard from her since. Oh well, that happens a lot when you travel.

Arriving Kuala Lumpur - KLIA2 Airport
As soon as we landed (10:55am, 4 hours), it was a frantic rush to catch all the transfers - I was only minutes from missing one and that would cause a domino effect that would make me late for the course. Upon getting my checkin luggage, I made a dash for the Rapid Transit train (ERL) which would arrive at 11:40am - I got there at 11:30! The train was expensive (MYR38, 32 mins) but it was the fastest means for me to catch the 1pm bus for Kuantan.

KLIA2 Airport - TBS - Gambang
I got off at Bandar Tasik Selatan station, ran to the main terminal - TBS (Terminal Bersepadu Selatan). It was a long line at the ticket booth. I could have booked this online but I wasn't sure what time I'd arrive at TBS. Fortunately, I got the ticket in time for the 1pm bus that took me to Gambang (MYR 24, 3.5 hours) where the meditation center is located.

UMP Stop to Dhamma Malaya
From the bus stop, it was a 2.5km walk to the center. I could have taken the chartered bus from KL (as arranged by the center) but it left too early and charged round-trip to KL. A cab would be too expensive. The only option was to walk. I didn't walk too far yet when I hitched a ride on an SUV that gave me a ride all the way to the center, even if it wasn't really his way...whoa!!! The blessings have arrived.

I arrived at the center 4:10pm. I wasn't late. I had ample time to attend the paperwork, freshen up and be ready for the initial gathering.

Ending Thoughts
Even at the planning stage, I already realized everything would be a rush. It was important for me to write down the chronology of steps together with the time frame in order to stay track and not be rattled when the pressure builds up. I wouldn't have to do any more thinking - I would just follow the steps I've written down. It helped a lot! It really did specially in moments when there was no time to think anymore.

The entire trip took 24 hours (4pm Loboc to 4pm Gambang) which included riding a jeep, tricycle, boat, taxi, airplane, train and bus. This included hitching a ride and walking. That was exhausting but at the same time reassuring for me knowing I was back to my old game again - backpacking!

The highlight was the fast-thinking when things didn't work out as planned. Somehow, the survival instinct kicked-in and saved the day.

After the course, I would be spending time in Kuantan before my flight to Kathmandu - 2 months altogether. But my money now is much less than I thought I could start with. The P5000 I spent for my medical from the failed cliff dive and the P2500 in airport charges took about a month of living expenses from me. After the course, I have to find creative ways to minimize my expenses and make money on the side. This should make the trip more exciting.

RG
(Mar 28, 2018) I just read your post about getting to Malaysia for your Vipassana sit. I'm leaving tomorrow morning for my own 10 day course. And now I realize I didn't print the customs letter! lol! I hope I have smoother sailing than that. But at least you made it in the end. quite a lot of good happenstance in that story. I guess when there's a will there's a way. This will be my 2nd sit. Wish me luck.

Marie-Claude Bouchard
(Mar 27, 2018) Why would they ask for a return flight? Never heard of this. Normally they ask for in/out flight of the country you visit?

TheLoneRider
(Mar 28, 2018) My speculation is to prevent Filipinos from becoming illegal aliens in other countries in case they decide not to come back. The bigger solution of course is for the government to boost the economy so people don't become economic refugees abroad but that's easier said than done.

»» next Traveling story: Satipatthana Sutta Vipassana
»» back to Traveling
»» back to Homepage