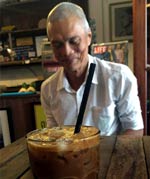 Goodbye and Thank You Kuantan

17 Days
Normally, I would stay in one place for the entire length of my visa, usually 30 days and then move to another country. After my 10-day meditation course in Gambang, I defaulted to Kuantan to see what life I could have in the remaining 17 days I had.

Food
Kuantan doesn't have the popularity of Penang when it comes to food, but locals have their favorite eating places - and they're likely to be good. You just need to identify and look for them given all the myriad of eating places you see all over Kuantan. If I don't feel like going the distance for good eats, I'd default to my staple, the Mamak restos where you can get a freshly cooked roti + curry sauce for MYR1.30.

Fitness
My 2-hour daily workout at 7am at the esplanade is perhaps the only constant during my stay in Kuantan. With the river and the fitness facility by the playground, I simply had to make the most out of it. After Kuantan, I don't know what my workout landscape will be if ever there is one. I would be joined by friends who would be a part of it for a few days before they drift off. My workout could be rope skipping, calisthenics, yoga, high intensity interval training (HIIT) but Pranayama would always follow the workout and then finished by Meditation. Those 3 in combination (physical workout, pranayama and meditation) are powerful and bring about a speedy transformation in fitness and mental resolve.

Alex and Lala
While working-out, a Chinese couple were on the far end emulating what we were doing. I asked them to join us. This started a friendship with Alex and Lala. They would join us for our daily workout. At one point, the couple even invited us for a sumptuous seafood dinner at the popular Alor Akar Seafood Restaurant. In the conversation, Alex would be Lala's interpreter as Lala only speaks Mandarin. 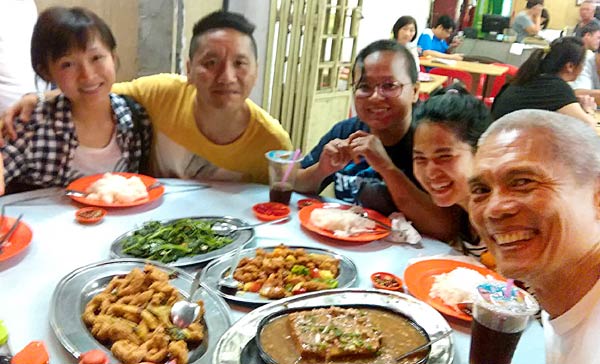 Mohd Hatta Ismail
Hatta is a man of dimension. The first 5 minutes with him makes that apparent. He hangs out at the Tjantek Art Cafe where he does his architectural design work. That's where we met, which was followed by an engaging conversation covering many things - art, history, architecture, life, etc.

I would have stopped-by more often to chat with him, but the starting coffee price at MYR6 was a little too steep given my dwindling cash. I'm confident he would have waived the charge but that's a little too uncomfortable for me. My loss, absolutely.

Rosnita
Wanting to meet locals over coffee, I tapped into Couchsurfing where I'm a member. Rosnita was good enough to respond and we met for dinner at the popular Chinese dimsum resto, Chan Poh. It was a laid-back conversation about Kuantan, traveling and life. I'm sure we could have hung-out and talk some more if I had more time in Kuantan but it was a little too late when I met her. Nonetheless, I'm grateful we met. Like most promising things, it could pick-up where we left off, if and when our paths cross again.

Amal
Also through Couchsurfing, Amal is someone I didn't really meet but had a few online exchanges with. She's from Syria and laments at how the war has ravaged her country. With the saber-rattling going on now with the US about another attack on Syria, she is deeply disturbed...as I am.

When is the US going to stop exporting war to feed its insatiable industrial military complex? Under what pretense or pretext are they going to do it this time? I am reminded of a no-war on Syria article I wrote 5 years ago that to this date continues to plague this country.

Visiting Dhamma Malaya
One last hurrah before Girlly and Sothy's departure from Kuantan, we took the bus ride to serve for a day at Dhamma Malaya, the local Vipassana center. Our unannounced visit was met with a little apprehension because people who wish to serve usually apply online in order for arrangements to be made. We were totally unexpected. They had to secure permission from the teacher. We were not able to serve much though. We came noon time, and they offered us lunch. This was followed by a 1-2pm customary 1-hour sit before anything could be commenced. This was again followed by the 2.30-3:30 group sit. So, by the time we could start serving, it was already 3:30. We had to leave at 5:30 to catch up with Alex's dinner invite. Essentially, we only served for 2 hours. I think we caused for more discomfort by having some staff attend to our presence. Nonetheless, I felt good being at the center and being able to sit again and see people I met from my Satipatthana sit from March.

Youtuber
I was advised by a few friends (Eyla, Ferdie, Girlly, etc.) that I should move my format from pictures to video, upload to Youtube and possibly make money out of all the travels I do. It does make sense. So organized myself to be a Youtuber, consolidating 2 accounts, categorizing my videos into themed playlists and started taking short but essential videos of Kuantan. I don't think I'll ever make money on this, but it's good to be up to date with online trends.

Taman Esplanade (riverside park)
The riverside esplanade has been my staple. Kuantan isn't exactly a charming city, but the riverside is perhaps its most charming feature. I'm there daily to do my workout. On some afternoons, it's also good to chill and watch children at play or adults line up the railings to catch fish.

Ending Thoughts
After 17 days in Kuantan staying at the Kuantan Backpackers, satiating my belly with Mamak food and teh tarik, promenading along the Esplanade, visiting its art museum, the mosque, beach and zoo, it was time again to pack-up and leave for a new destination. 17 days gave me a glimpse of Kuantan's people, its culture, cafes, eating places and a few of its tourist attractions. The helpful staff of the lodge became familiar housemates. Eyla was particularly helpful. I think the challenge for a traveler is to find the hidden gems in a place where it's not too apparent. It needs more than just a couple of days to make that happen. I think I leave Kuantan having discovered a few.

Rosnita Abdul Karim
(Apr 15, 2018) Did you have any luck finding the telur separuh masak for breakfast on your last day in Kuantan?

TheLoneRider
(Apr 15, 2018) Yes, I went to a Kopitiam and showed the waiter the paper you wrote on and he gave me a 2 soft-boiled eggs and a toast. It's good, but the toast didn't come with butter...he-he.

The 18-Hour Trip from Kuantan, Malaysia to Kathmandu, Nepal

(April 12-13, 2018) With my visa expiring, I had to move out of Malaysia to Nepal. No matter how thorough I thought I had been in the preparation, I still missed out on one minor detail that wreaked needless hardship....more »»

(June 23-July 8, 2018) With an offer to teach yoga and a barter-deal for a roof over my head, I left the bliss of Upper Bhagsu to stay 16 days at Pema Thang Guest House in McLeod Ganj. It was a different scene altogether and a different challenge.....more »»